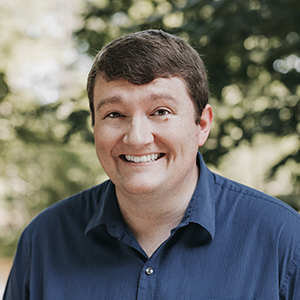 From the people we know to the regional culture and physical location of our hometown, where we grow up shapes how we understand the world. I was born and raised in what felt like the middle of nowhere, a small town not far from the border of Oregon and Idaho. I was also near the border of our county, between the Pacific and Mountain time zones, the border of the upper 45th parallel, and perhaps most salient to my current profession, the border of a Nielsen designated market area (DMA).

The Portland DMA is…weird. It stretches from the North Coast through the metro Portland area, all the way to the Idaho border. Growing up, I remember how we had two versions of NBC in our cable package—the Portland feed and the Boise feed—and while the programs were the same, the ads were different; not just the local ads, but versions of major national commercials differed simply by which channel we tuned in to. This was message segmentation in action, but imprecise execution. While I lived in the Portland DMA, the culture in Baker City, Oregon, was closer to that of the Boise DMA, and further still, the culture of the rural counties in the surrounding area was very different from downtown Boise. 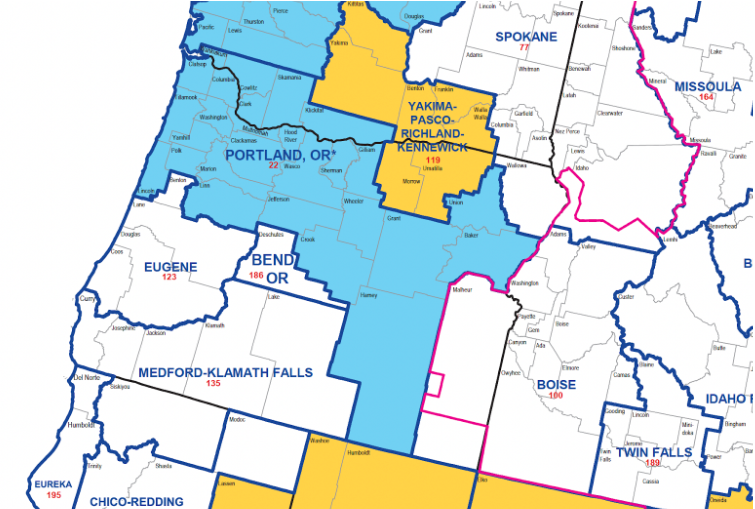 * The Portland DMA is in blue here.

Why differences within a DMA matter

Years later, an enrollment manager and his marketing colleague asked me how they could understand more specific areas within a market for message segmentation of institutional personality. It reminded me of the cultural differences of my small town to the major metro we were associated with in DMA terms. I also remembered a conversation I had with a friend I made while attending Washington State University. He was also from the Portland DMA, but actually Portland—the Pearl District to be exact. Our journey to a school in rural Washington was very different.

As part of Carnegie’s most recent research called the Carnegie Neighborhood Psychographics Report, I was able to look at the college preference differences between distinct types of ZIP Codes. Here’s one example: Gray is the US average for percent of students who would consider each type of institution. Can you guess which result is from my rural ZIP Code type and which is from my friend’s ZIP Code type near downtown Portland?

Okay, maybe not a surprise, but the gold bar represents ZIP Codes demographically and locationally, like Baker City 97814. Students in this far more rural type of ZIP Code had a higher likelihood of interest in public schools and especially trade schools. My friend’s ZIP Code type was more likely to attend private schools. Here’s another example asking those same respondents the farthest distance from home they would consider for higher education: 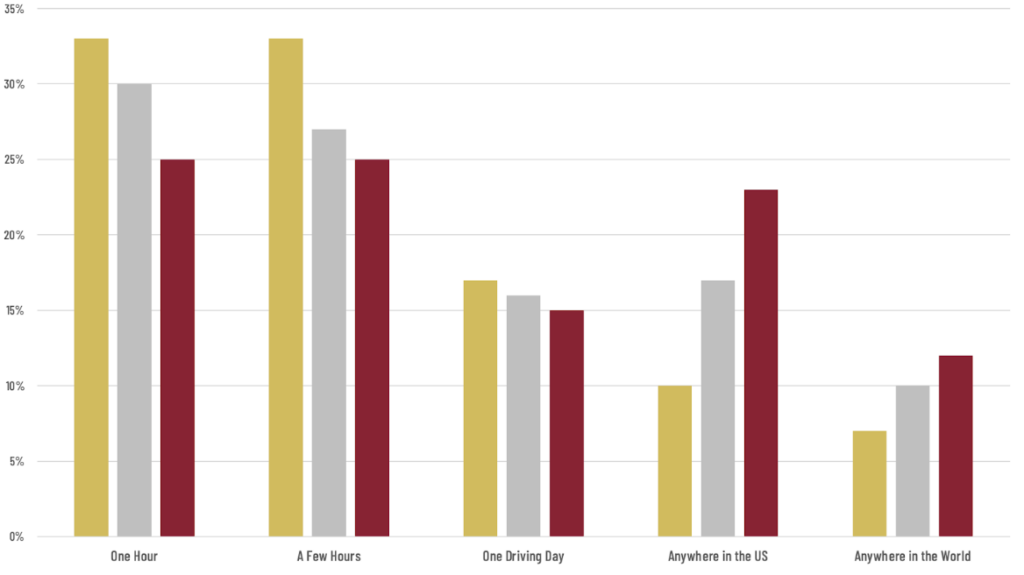 The problem with markets as monoliths

As seen here, the differences in preference for these ZIP Codes vary quite a bit. Despite this, my friend and I had received basically the same set of college advertising and enrollment materials—not because we were particularly alike, but because we both lived in the Portland DMA. This was a while back, so I’ll forgive most schools of the day. But in the 2020s, with the level of sophistication accessible to most schools for segmentation, sending a one-size-fits-some message at a broad market level instead of dynamic segmentation by households or ZIP Codes is a mistake.

At Carnegie, it was our mission to understand if this also holds true with personality and communication preferences. While household targeting for personality (like what’s found in our Darts and Motivator products) is ideal, it isn’t always possible, especially before a name purchase or high inquiry traction in a ZIP Code for a new market. As such, we decided to do in-depth national research on the personalities, communication preferences, hobbies, lifestyles, and college selection criteria of a large sample of prospective students within distinct ZIP Code types.

Before collecting key student information, a system for classifying ZIP Codes as similar demographically was needed. Using population density, distance to a major metro, and income information from most ZIP Codes in the country, we were able to create 32 demographically distinct types that apply across the United States. Using this information, we sampled prospective students using an approach that allowed for demographically representative responses for each ZIP Code type. This became the foundation for the Neighborhood Psychographics Report.

What did Carnegie do with all this information? After data cleaning and analysis, a baseline report was created with profiles of each of the 32 ZIP Code types. Each profile contains information about which factors of attendance are most relevant in these ZIP Codes, the personality message that resonates the most, and interesting demographic or lifestyle factors that make certain ZIP Code types stand out depending on your institution. For example, a college interested in attracting families of veterans might investigate ZIP Code Type 24 (named “Interstate Stops”) because of the demographics in the ZIP Codes while using a Vitality-infused message (one of our three motivators)  based on the personality information from the report. This example institution would also know from the CNPR that ZIP Code Type 24 prospects are less likely to be distance flexible, more likely to need scholarships and aid to afford their education, and prefer a public college or university.

The CNPR is also customized for each institution based on historical enrollment trends. Institutions can track which types of ZIP Codes they’ve seen success in and which types to break into further based on matching information to goals. All institutions that work with Carnegie on their personalized report will also get an easily navigated and utilized Excel file of ZIP Code by ZIP Code information for making critical enrollment decisions. With opportunities to easily filter by key demographic and psychographic variables, this spreadsheet unlocks name buy strategies, digital execution opportunities, and region-specific information for expanding enrollment. 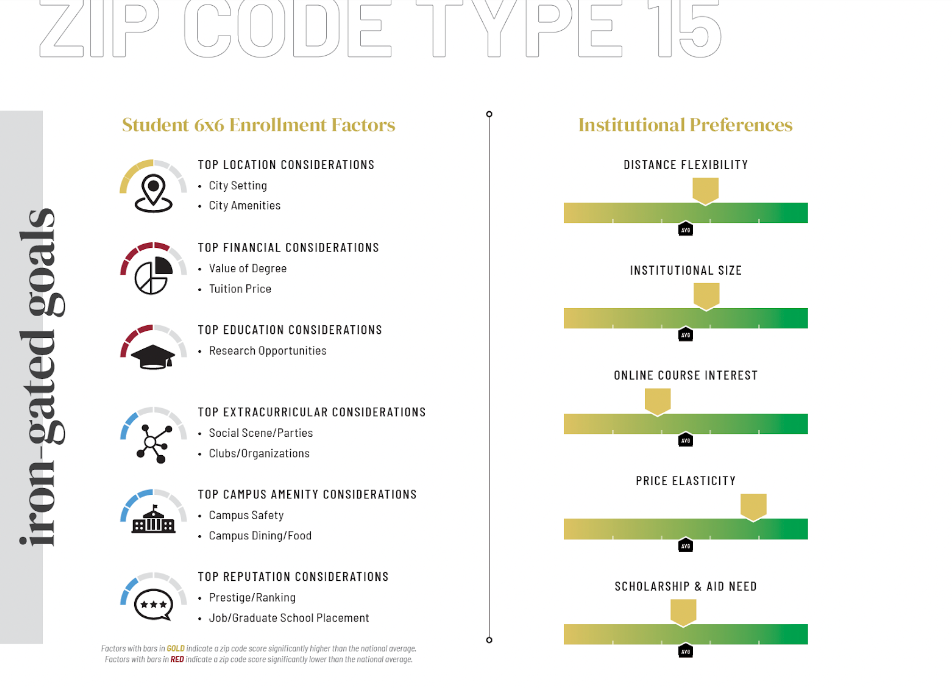 Combining the CNPR with other Carnegie offerings

Colleges and universities that have worked with Carnegie on institutional brand personality solutions are well aware of the power of psychometric marketing. The CNPR acts as an extension of this information, allowing for more specific personality messaging strategies in certain areas of different markets. As an example, one of our partner institutions has a bold Orange creative streak and a powerful Blue achievement message. When attempting to optimize their digital advertising in a new market space, being able to differentiate parts of town that would resonate with their creativity, and others their achievement, is possible with the data from the CNPR. This is a particularly significant integration with digital campaigns, because of the changing regulations with direct targeting of audiences on Facebook, Instagram, and Google. We are already infusing this Zip Code approach in our digital strategies, to improve our targeting capabilities on those platforms.

The CNPR can be used to inform and enhance your Student Search name purchasing strategy, OTT media buying strategy, digital campaign targeting, and messaging leveraged in those campaigns. If you’re interested in learning more about students and distinct ZIP Code types in your major student enrollment markets, contact us for more information about the CNPR, and be on the lookout for continuing research reports we produce from large-scale national research studies like these.

Jared Brickman is a true data nerd. With a decade of research experience in communication technologies and campaign studies, Jared is practical, focused, and driven by the compelling stories found underneath the numbers. He has won local, national, and international awards for his overall research on mobile health, viral web content, and online social support. He is also an active member of the research review community and is an upcoming member of the editorial board for the peer-reviewed journal New Media and Society.

But in the 2020s, with the level of sophistication accessible to most schools for segmentation, sending a one-size-fits-some message at a broad market level instead of dynamic segmentation by households or ZIP Codes is a mistake. Click To Tweet